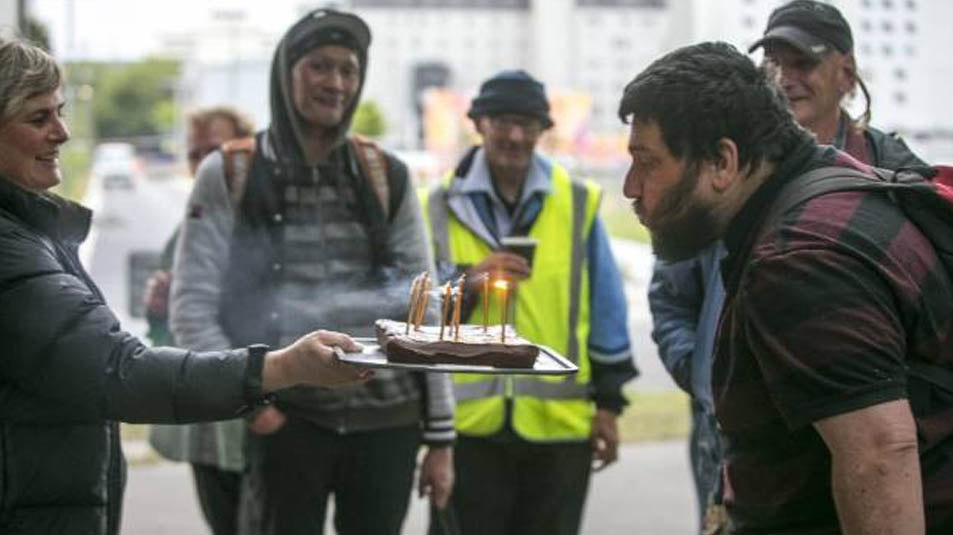 One of my indelible childhood memories of life in Christchurch is of Cathedral Square, watching the Wizard, the Bible Lady and the Birdman. I also remember the homeless men, who hung out everyday in a City Mission caravan.

Homelessness and its insidious bed pal, addiction, have been a long-standing issue in Christchurch. But as the resuscitation of the  central city has steadily unfolded, the proliferation of rough-sleepers and opportunist street beggars has seemingly become more conspicuous.

In Hereford St alone last week, I counted over a dozen rough-sleepers in their make-shift encampments.  Add to that, the upswing in beggars. It's distressing, dispiriting and detracting. And like road works, it's yet another hurdle undermining central city operators in their quest to make an honest dollar in inviting surroundings.

Representing the city council's Central Ward, Deon Swiggs has a big and benevolent heart which he proudly wears on his sleeve. But even Swiggs concedes that livelihoods in the central city are at risk from the rough-sleepers and beggars. He tells me, "it is about safety, perceived and real. If people do not feel safe on our central city streets then we must address that".

Nothing is gained by giving the opportunist beggars money, other than financing their next hit. Even more perversely, as the Christchurch City Mission chief executive, Matthew Mark, told The Press in November, "some people are making a jolly good living out if it".

Last year, the City Mission and a host of social agencies strongly advised people not to give the street beggars money – but many still do, even though they're being unceremoniously conned. You're far better off funnelling your donations to the established and effective outreach charities, like the Sallies, the City Mission and Drug-Arm,  which are focused on tackling genuine need.

All manner of newcomers has supersized the "outreach industry" in Christchurch, including Help for the Homeless and the latest registered charity, Streetwise, which was profiled in a feature article in The Weekend Press. The article repeated the misconception that you can only draw a benefit if you live at a permanent address.

Housing First Auckland says that claim is one of their "biggest urban myths about homelessness". A lack of permanent address does not preclude a rough-sleeper from receiving a benefit. Meanwhile, as Streetwise flood the streets with more free food, blankets and clothes, how it that solving the problem of ending homelessness?

It arguably perpetuates their dead-end presence on the street. As Mark points out to me, the City Mission's night shelters already provide food, accommodation and specialist support. Interestingly he says, "We are presently operating at or near to capacity, but have not found ourselves in a situation where we have needed to turn anyone away based on bed availability".

Furthermore, the mission's goal is to help anyone on the street provide a long-term solution through "the provision of permanent accommodation, support to work through any other underlying issues that may be present such as substance addiction and mental health".

The City Mission is part of the city council's multi-agency approach to addressing homelessness, street begging and street-based sex work. Two outreach social worker roles have just been established which Mark believes will "better meet the need of working alongside our homeless", and those who feel they need to live on the street.

I'm a huge fan of the Housing First model, which has a proven track-record in solving chronic homelessness, underpinned by its intensive wrap-around specialist support services. The city council's multi-agency group has signed up to the programme, with the goal of permanently housing 100 chronically homeless with complex needs, within two years.

Those complex needs generally can't be managed by existing housing providers.  Thirteen Housing First placements have already been made, with top priority going to those who have had at least four episodes of homelessness in the past three years. Best wishes to Housing First Christchurch as it sets about making a real difference and achieving lasting solutions.

CCBA's chairman, Brendon Chase, describes it as a work in progress where there won't necessarily be significant quick wins.

CCBA is also collaborating with the police to help minimise the incidence and impact of rough sleeping and daytime loitering.  Chase is calling for more concerted actions to stop the incidence of encampments of rough sleepers (and their possessions) forming on central city streets.

Will CCBA remain an active partner in the multi-agency group? "We will honour our undertaking in this regard, so long as it does make material progress." Our city deserves no less.