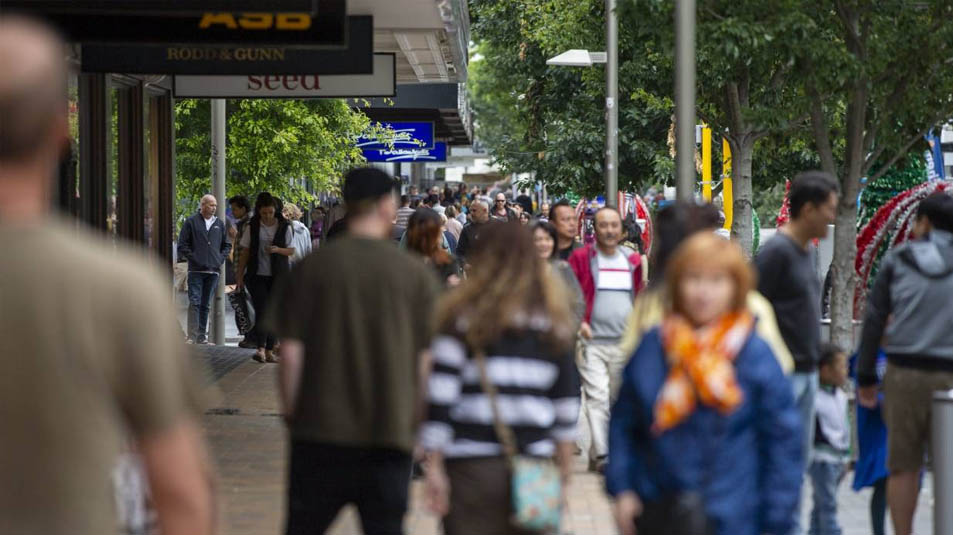 Thousands of shoppers descended on shopping malls across the city on Wednesday, with some queuing outside Westfield Riccarton from 7.30am.

But despite the bustling malls, the city centre's new retail precinct appeared busier than ever.

Shopper Helen McQuarters lives in Lincoln, but came to the city centre on Boxing Day because her niece wanted to hire a Lime scooter.

"It is great here. It is very busy. It has got real potential," she said.

Chris McGann, who was waiting for his partner outside a shop on Cashel St with his Corgi dog Melvin, said he preferred the city centre to the mall.

"We would much rather come here than go to the mall," he said.

"The mall is crazy. There are too many people."

"It has certainly improved on last year," he said.

"The central city will continue to improve ... We are competing with the malls. We would prefer that customers would find their way to the central city and find out what is going on there."

He said the new library, Tūranga, and Lime scooters had also attracted people.

"You should not overlook the library. It is not just about retail in the central city. Having that hugely significant community building open in the city centre is great," Chase said.

"It has bought in a lot of families. The Lime scooters have had an affect too. It is just something an outside company has planted in our streets, but it has caused a lot of activity and happiness and, hopefully, not too many injuries."

Figures from the country's electronic payment system, Paymark, show spending in Canterbury over the weekend rose about 4 per cent to $48m, compared to the same period the year before. New figures on Boxing Day spending would be released in January.

But the revived crowds in the city centre were much smaller than at the city's largest shopping mall - Westfield Riccarton. Around noon, traffic was at a crawl on Riccarton Rd from about half a kilometre east of the mall.

Mall centre manager Kirstie McNulty said they extended their opening hours from 8am to 8pm to spread out the crowds. She said people were queuing outside Noel Leeming and JB Hi-Fi at 7.30am to grab a Boxing Day bargain.

She did not have exact figures for how many people visited the mall on Wednesday, but said it was in the thousands.

"It was one of the biggest trading days of the year," she said.

"The car park was full. It has been a very busy day. We were as busy, if not more busy, than last year."

Marianne Beere was shopping with her son at Westfield Riccarton and described the mall as "chaos".

"It is really busy," she said.

"We do most of our shopping in town. We try and avoid the mall. Malls suck the life out of you."

Greg Hay was also shopping at the mall, but preferred the city centre.

"We are going into town after this. I don't like the mall food courts. It is a bit of a pig's trough."